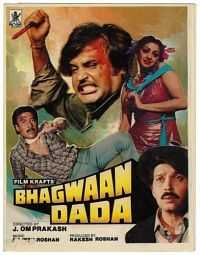 A villager who is new to the big city – Bhagwaan (Rajinikanth), turns to crime to avoid starvation. He is drawn into the gang of slum crime lord Shambhu Dada (Danny Denzongpa) where he falls into every crime but one: violence against women. When an impoverished but honourable young widow hangs herself after being raped by Shambhu Dada, the cries of her orphaned baby awaken Bhagwaan’s soul. He rebels against his former master. Bhagwaan vows to atone for his formerly evil life and adopts the orphaned baby as his own son. The innocent young boy becomes Bhagwaan’s source of personal redemption and the inspiration for all that he does.

12 years later the man now lovingly hailed as “Bhagwaan Dada” has transformed the former crime-ridden slum into a safe and happy neighbourhood Shantinagar, where his adopted son Govinda (Hrithik Roshan) has become the pride and joy of the whole community. Despite his own dark past, this loving father has worked hard to raise the boy as a good person with sound moral values.

At this time, Bhagwaan chances to rescue another naive young man Swaroop (Rakesh Roshan), new to the big city. When Shambhu Dada’s gang steal all Swaroop’s money. Impressed with Swaroop’s education as well as the similarity of situation to his own arrival in the city years before, Bhagwaan takes the “innocent and simple” villager under his protective wing. He arranges a good job, even brings Swaroop home to live with himself and his son, young Govinda. Swaroop and Bhagwaan claim each other as “brothers”.