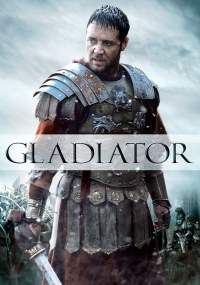 In AD 180, Hispano-Roman General Maximus Decimus Meridius intends to return to his home after he leads the Roman army to victory against the Germanic tribes near Vindobona on the Limes Germanicus. Emperor Marcus Aurelius tells Maximus that his own son, Commodus, is unfit to rule and that he wishes Maximus to succeed him, as regent, to help save Rome from corruption and restore the Roman Republic. Upon hearing this, Commodus murders his father.

Commodus proclaims himself the new emperor and asks Maximus for his loyalty, but Maximus refuses. Maximus is arrested by the Praetorian Guard and is told that he and his family will die. He kills his captors and rides for his home near Trujillo, where he finds his home destroyed and his family murdered. Maximus buries his wife and son, then collapses from his injuries. He is found by slavers who take him to the city of Zucchabar in the Roman province of Mauretania Caesariensis, where he is sold to a gladiator trainer named Proximo.

Although reluctant, Maximus fights in local tournaments and befriends two other gladiators: Juba, a Numidian; and Hagen, a German. His military skills help him win matches and gain recognition from other gladiators and the crowd. Proximo reveals that he was once a gladiator who was freed by Marcus Aurelius, and advises Maximus that he must “win the crowd” to win his freedom. When Commodus organizes 150 days of games, Proximo takes his gladiators to fight in Rome’s Colosseum.