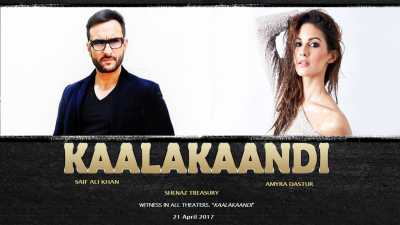 Kaalakaandi is a 2018 Indian black comedy film written and directed by Akshat Verma, starring Saif Ali Khan and Sobhita Dhulipala. The film is produced by Rohit Khattar and Ashi Dua. The film was released 12 January 2018. The music of Kaalakaandi is composed by Sameer Uddin and Shashwat Sachdev while lyrics have been penned by Anvita Dutt and Akshay Verma. The first track of the film titled as “Swagpur Ka Chaudhary” which is sung by Akshay Verma was released on 23 December 2017. The music album of the film was officially released by Zee Music Company on 27 December 2017 which includes 5 songs.