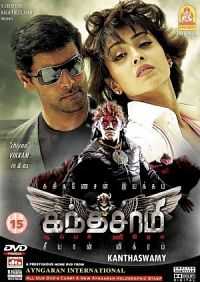 Kanthaswamy (Tamil Kantacāmi ?) is a 2009 Tamil language action film written and directed by Susi Ganesan starring Vikram in the titular role. Shriya Saran, Prabhu Ganesan, Krishna, Ashish Vidyarthi, Mukesh Tiwari, Mansoor Ali Khan, Vadivelu and Y. G. Mahendran form the supporting cast. The film’s soundtrack and background score was composed by Devi Sri Prasad. The film’s soundtrack was released on 17 May 2009 and the film was released on 21 August 2009 to average reviews. The film was dubbed and simultaneously released as Mallanna in Telugu. The Telugu version was later dubbed into Hindi as Shiva – The Superhero and does not feature the song ‘Meow Meow’. It was remade in Bengali as Most Welcome, starring Ananta, Barsha and Sneha Ullal.