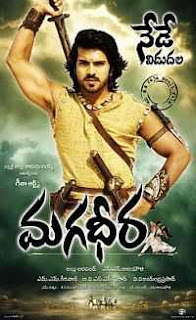 Magadheera (English: Great Warrior) is a 2009 Indian Telugu-language romantic-action film, written by K. V. Vijayendra Prasad and directed by S. S. Rajamouli. Based on the theme of reincarnation, the film was produced by Allu Aravind of Geetha Arts. The film stars Ram Charan and Kajal Aggarwal, while Dev Gill and Srihari appear in prominent roles. The plot revolves around four people: a valiant warrior in charge of the princess’ safety; the princess who loves him; her cousin who lusts after her; and an emperor who wants to conquer their kingdom. They all die before their wishes are fulfilled and are reborn after 400 years, at which point the warrior kills the scheming cousin with the support of the reformed emperor and wins over the princess.