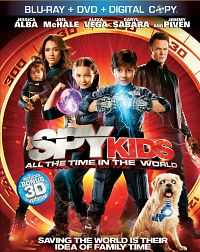 Marissa Cortez Wilson (Jessica Alba) is a retired spy who keeps that identity hidden from her clueless husband and whip-smart twin stepchildren, Rebecca (Rowan Blanchard) and Cecil (Mason Cook). However, when a villain called Timekeeper (Jeremy Piven) threatens to conquer the world, Marissa springs back into action as head of the OSS, home of the now-defunct Spy Kids Division. With help from some cool gadgets and two former spy kids, Rebecca and Cecil join the fight to save Earth.