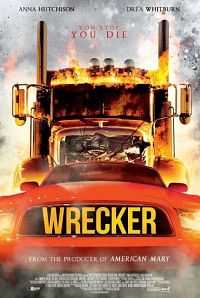 If you’ve ever watched Steven Spielberg’s classic television movie Duel – his debut film – and thought, “Hey, this movie would be a lot better with a couple hot chicks in it,” then Wrecker could be perfect for you.

But you’d still end up disappointed.

Also read – Hotel Transylvania 2 film review: who knew vampires could be so dull?

Before I dive in, allow me to state something up front: I’m a fan of highway horrors. Anything from The Hitchhiker to Joy Ride and Duel is usually right up my ally.

They’re ironically also kind of films in which there is actually very little mobility: you’re going to be stuck indefinitely in a car and on a highway or deserted stretch of road while horrible shit happens.

If you saw the trailer above, it’s easy to see that, just like Duel, a massive truck piloted by an unseen driver terrorises a small car on an isolated patch of highway for pretty much no apparent reason other than the fact that the car overtook the truck.

A still from the film
They’re driving somewhere to reach something on time – but that doesn’t matter at all. All that matters is that they end up on the road and piss off some trucker, sorry, ‘Wrecker’, and get stuck in a world of unnecessary trouble.

And like Duel, you don’t really get a glimpse of the trucker – who’s defined only by the upside-down crucifix and pentagram hanging from his rear-view mirror.